A "display" encompasses anything from a single line LCD display through computer monitors to large public information display boards, such as those used at railway stations to indicate train times. In the latter case, the display comprises the complete PAT, since there are no user-operated parts.

Most text displays use CRTs, LEDs or backlit LCDs so they provide their own light source. They should have enough power to provide a clear contrast between the light and dark areas in all conditions. If this is not the case, the display will have to be adequately illuminated from an external source.

People who cannot read are often perfectly able to understand the same text if it is spoken. This can be achieved using either pre-recorded audio or speech synthesis. Speech synthesis, whilst more flexible, is often of much poorer quality and may be difficult to understand for some users and in noisy environments. If voice output is likely to be intrusive or if information is sensitive, allow the audio to be turned off during a user session.

Provide a standard jack socket for connecting an earphone and consider providing wireless access to a personal device, such as through a Bluetooth connect to a mobile phone. When using a jack plug, its insertion should switch off the output to the external loudspeakers. This should also be done once a wireless connection is made.

Being "within sight" means that the user's line of sight to the display is unobstructed at a distance and angle that enables the display to be read clearly by someone with 20:20 vision, within the environmental constraints such as ambient lighting (allowing for users with restricted vision is covered in other checkpoints). The display should be within sight from whatever position and orientation the users find themselves in naturally when using the terminal. This will be different depending on the person's height and whether they are sitting in a wheelchair or motorised buggy.

Avoid all flickering or flashing with a frequency of more than twice per second. This includes flashing backgrounds or text, repeatedly turning graphics on and off or cycling between different images.

Users who are deaf or hard of hearing should be able to perceive all of the outputs from the terminal. The outputs include any information that is presented and any physical items that are delivered, such as tickets, cash, receipts and returned cards.

Where possible, audible information should be delivered in a form that can be heard by users who are hard of hearing. This is achieved using a system that can couple to a hearing aid or with a separate earpiece with adequate undistorted sound (which is also hearing aid compatible). Where this is not possible, or for users who are profoundly deaf, an alternative form that they can perceive should be made available and provide the same information.

A display that is positioned for optimal viewing by users of average height may present difficulties for other non-average users. Users who are extremely short, extremely tall or who sit in a wheelchair will be looking either up or down at the display and from further away. The increased distance may mean that fine text or information is difficult to read. The more acute angle may also affect readability by changing the aspect ratio. It may also mean that other parts of the terminal get in the way.

A particular problem for people looking upwards at the display is the effect of reflected light. Some terminals, particularly ATMs in the street, are completely unreadable when the sun is shining on them. Someone who is taller can often position their body between a light source such as the sun and the display, making it easier to read. 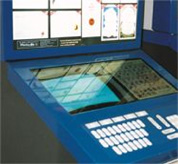 Displays that flicker or flash can cause photosensitive epileptic seizures in susceptible individuals, particularly if the flash has a high intensity and is within the frequency range between 2 and 60Hz.

If audio output in the form of spoken language is used to present information, users who cannot hear well enough to understand what is said will not be able to perceive the information being given. Not being able to hear audio outputs well enough to understand them is often due to a combination of poor hearing, inadequate sound quality and background noise. By increasing the sound quality and taking steps to reduce background noise, even users with some hearing impairment will be able to understand the spoken information.

Often, terminals rely on intentional sounds such as beeps and chimes or incidental sounds such as motor noises and coins being dispensed to inform the user that something has happened. This is particularly the case for outputs such as tickets that appear in a tray which it is difficult to see into. If there is no corresponding visual indicator, users who cannot hear the sounds may be unaware that something is happening or an output has occurred.

Refer to appropriate physical design guidelines or building accessibility guidelines that give minimum and maximum heights. The United Nations have a useful set of anthropometrical data covering ranges of height and reach when standing or sitting in a wheelchair.

Ensure that users of all heights can see displays. The standing eye height for the largest person (95th percentile) is approximately 1.8m. The standing eye height for the smallest person is approximately 1.35m. Wheelchair users often have eye heights as low as 1.15m. Where there are controls at the side of the screen which relate to the content of the screen, there is the potential for parallax problems. This problem can be exacerbated when the screen is set back to accommodate a reinforced or privacy screen. Using clear visual or raised lines to link the button to the edge of the screen can be beneficial.

The conflicting requirements of tall pedestrian users and short wheelchair users can lead to a significant group of users having parallax problems when lining up the function keys with the displayed option. Lines on the user-interface leading from the key to the surface of the display can alleviate this problem.

Increasing the size of text or other displayed information can help to make it more readable at an angle.

In extreme cases, consider using height adjustable or rotatable displays, or dual-display systems.Allow for red/green and blue/yellow colour blindness, so do not use red text on a green background.

Speech output can be achieved using either pre-recorded audio or speech synthesis. If possible, use digitised pre-recorded speech that has been recorded in a professional studio and spoken by a trained announcer. Speech synthesis, whilst more flexible, is often of much poorer quality and may be difficult to understand for some users and in noisy environments. 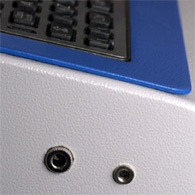 If voice output is likely to be intrusive or to be of a personal nature, provide a standard headphone socket.

Baffles or sound absorbing materials can be built into the terminal casing. In extreme situations, audio output can be provided via a headphone or earpiece. If audio output is provided via an audio transducer held to the ear, provide a means for effective wireless coupling to hearing aids.

Provide volume controls to allow users to increase the sound level. In the past, manufacturers of telephones have offered amplification but have thought that 6dB was adequate. However, many hearing impaired users need amplification of a much greater level. The recommended limit is 20dB, which is the maximum that can be used on a conventional telephone without getting positive feedback (i.e. The howl). It is essential that the audio level is reset to a normal level before the next user. This maximum level of 20dB only relates to telephones. In a noisy environment (for example, on a street), the base level could be a function of the ambient noise.

Supplement audible cues, such as clicks, beeps and spoken alerts, with simultaneous corresponding visual cues, such as flashing indicator lights.

Designers can run simple sight tests on a prototype, simulating short and tall people and wheelchair users by sitting in a chair, standing on a raised area or kneeling down. Whilst this will not be a replacement for proper testing with real users, it will give some insight into what it is like to be viewing the display from the user's perspective and will help reveal any obvious problems before further work is carried out. If standing on something, you should make sure that it is sufficiently strong and stable and take care to avoid the possibility of injuries caused by falling off it. Difficult lighting conditions are easily simulated by either using the prototype outside in sunlight or positioning artificial lights appropriately.

If you are designing using a CAD package, you may be able to simulate different viewing points before creating a prototype.

During development, you should test the prototype in a realistic situation with real people, particularly people who routinely use wheelchairs or motorised buggies.

Designers can run simple hearing tests on an early prototype by simulating various degrees of hearing loss or environmental conditions. Complete loss of hearing can be simulated by turning off the audio output from the terminal, although this will not remove the sound of printers, motors or other moving parts that may provide useful clues about what is happening. Wearing earplugs, industrial ear protectors or noise-cancelling headphones can considerably reduce all sound, although it is difficult to reach complete loss of hearing.

Partial hearing loss may be even more difficult to simulate accurately, since the degradation is often not uniform across the frequency range. It may be greater at some frequencies, particularly the high or low ends of the hearing spectrum.

To simulate noisy environments, it is best to test the prototype in situ if this is practical. Otherwise, recordings of background noise from typical environments can be used.

In all cases, care should be taken when running these tests since the user whose hearing is reduced may not be able to hear other important sounds, such as verbal warnings from experimenters, alerts or fire alarms.