Ensure that the remote control is as simple as possible, given the required functionality

Most users benefit from a simple easy-to-use design, as long as it provides the required functionality. People with intellectual disabilities or those who find technology challenging to use may have difficulty understanding and using a complex remote control with many different functions and would benefit from reduced functionality. Even people without a recognised impairment may be more appreciative of an easy-to-use design than one which contains a lot of non-essential functionality. In the UK digital switchover technical trial at Ferryside and Llansteffan it was found that:

In the survey of older and disabled television users carried out for these guidelines, one respondent with a vision impairment said:

I feel there are an awful lot of buttons on the remote control that I have no idea what they do! I probably use about 5 buttons regularly, and the rest just go unused.

Given the number of different remote controls that a person may have in the home, adopting industry standard layouts can be very beneficial for users. Another vision impaired survey respondent described how the differences prevent him from being able to use all the functions:

The buttons I can use, but if I have to do anything other than what I normally do, I can't do it. I use the basics. Each remote control is completely different. So I learn the basics of them and leave the rest to other people.

Buttons should be logically positioned and grouped according to their functions. The best results can be achieved by following these guidelines:

An alternative remote control can be provided, with fewer buttons covering only the basic and necessary functions. If this is not cost effective, it may still be possible to identify a simple third party universal remote control that works with the equipment and provide information to users on how to obtain one.

Quick access buttons for common functions assigned by the user can provide another useful way of reducing complexity. If these are grouped together, in a row for example, it can be easier for a person to remember the order of their favourite functions and press the required button without having to refer to the label at all.

Care should be taken in using coloured backgrounds for buttons, if they may be confused with standard colour buttons that are referred to in instructions or within programmes. For example, figure 8 shows a situation where an instruction to press the red button might be ambiguous, since there is more than one button that is red. This is borne out by the experiences of the UK digital switchover technical trial at Ferryside and Llansteffan, where it was found that some users experienced confusion between the ‘red button’ and the recording button which was also (mostly) red. 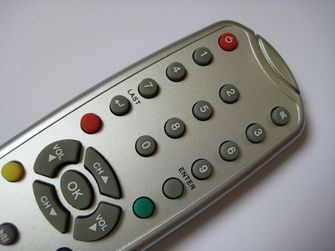 Operational complexity can also be reduced by avoiding assigning dual functionality to buttons and avoiding operations that require pressing two or more buttons at the same time.

Provide a dedicated ‘Back’ button that takes the user back to the menu, screen or function they have just left, allowing users to undo some types of mistakes.

It’s okay as long as I am familiar with the remote controls. If something goes wrong on the TV or I hit an incorrect button by mistake then I am lost as to what’s wrong.

Prototype designs can be assessed for understandability by user testing with a wide range of users, including older people and people with cognitive or intellectual impairments.

Eye tracking studies can be a good way of finding out where people look for buttons on a remote control or where they expect to find various functions. The results of such studies can be useful in determining the easiest to find locations which can be reserved for the most frequently used buttons.