The user should be able to distinguish the card from other similar cards.

If it is a contact card, the user should be able to turn it the right way around and insert it into the reader without being able to see the card or the reader. If the card is still inserted in the wrong orientation, it should be immediately rejected and the user should be notified of the error and allowed to try again.

Similarly for contactless cards, the reader should be easy to locate on the terminal.

Most people have a number of different cards for identifying themselves to different authorities or operating different machines or doorways. Often, the only distinguishing features on the cards are visual â€“ that is the colours and what is written on each card. A systems designer should ask him/herself: "If it was dark or I was unable to see, how would I know which card to use?"

Having retrieved the required card, it normally has to be put into a slot or run through a swipe card reader in a particular orientation and direction. A systems designer should ask him/herself: "How would I know which side is which and which end is which? And even if I knew, how would I know which end should go into the slot or past the reader and which side should be up or down or to the left or right?" The answer will usually have something to do with looking at both the card and the slot or reader.

Incorporate a raised symbol according to EN 1332-5. Note that, whilst Braille may seem a more obvious solution for tactile marking, less than 2% of visually impaired people can read Braille.

A 2mm notch on the trailing edge of the card will enable the user to correctly orientate it for insertion into a horizontal slot by touch (according to EN 1332-2). 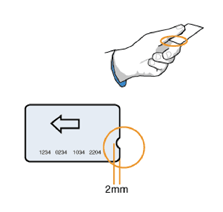 If possible, the card reader could be designed so that a contact smart card can be inserted with either side uppermost or leftmost. This will remove the possibility of errors. It does not, however, mean that there is no need to add an orientation notch on the card, since users who do not realise that any orientation is acceptable will then be unsure of what to do.

If the card is inserted in the wrong orientation, immediately reject it and notify the user of the error using an audible indicator such as a low beep which suggests failure. Then allow the user to try again.

It is helpful if the card entry slot has an illuminated indicator which is illuminated when card insertion is required. If the indicator is flashing, it is preferable to just flash a few times and then be continuous until the operation is complete (e.g. The card inserted).

Design a raised ridge around input slots such as those used for entering a card or plugging in a headphone jack. This will make them easier to locate by touch.

Design a funnel-shaped entry to the card input slot or other slots to help guide the items in. 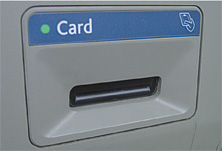 Contactless smart cards and other wireless devices work at a distance. They do not need to touch the reader device or to be placed in any particular orientation, expect reasonably flat to the face of the reader. The maximum working distance is typically no more than 10cm for security reasons.

It is important that the location of the contactless reader is easy to find on the terminal. High-contrast signs and/or physical indication for readers should be used.

For contactless cards and other wireless devices, it is important that audible and visual signals are provided when the card is used. These signals should indicate the card or device has been read, whether the read was successful and whether the transaction started by the card succeeded or failed.

Designers can run simple tests on an early prototype by simulating sightless use. This can be done either by wearing a blindfold, turning off the lights or concealing cards in a bag. If working blindfolded or in the dark, extreme care should be taken to avoid injury through loss of balance or collision with unseen objects. This may require that the test user remains seated or, if they have to move around, obstacles such as floor cabling are removed in advance.

During development, test the prototype in a realistic situation with real people who have complete visual impairment. In particular, include people who are recently impaired and have not yet developed enhanced tactile abilities.