The operable parts include such things as buttons and keypads, input slots for cards or money and dispensers for tickets, receipts or returned money. Users should be able to access all of these from whatever position and orientation they find themselves in naturally when using the terminal. Preferably, this should be a single position which does not require the person to reorientate themselves during the operation.

If a user has use of only one hand, they should still be able to operate all the functions of the terminal without requiring assistance.

Using the terminal may require a number of physical operations: pressing buttons or keys, turning knobs or other moving parts, inputting cards or other items and retrieving cards, tickets or other outputs. All these operations should be possible with minimal grip, pushing and pulling strength or twisting of the wrist.

Users who are extremely short or who sit in a wheelchair have substantially less reach than average-sized users who are standing up. If they have to overstretch to reach things, they may risk injury or, in extreme cases, may not be able to operate the terminal or collect their outputs. Whilst tall users can extend their reach by stooping, this could be embarrassing for extremely tall users, who may find themselves having to bend or crouch a long way. 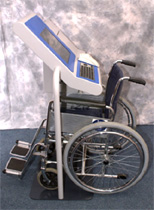 Knee clearance for wheelchair users should be provided. This image shows a terminal with knee clearance.

Wheelchair users may find it awkward to re-orientate themselves during use if this involves swivelling in a confined or crowded space. Where possible, knee clearance for wheelchair users should be provided. Knee clearance implies the terminal needs greater depth than is often practicable. In this case, adequate space should be allowed for the wheelchair user to use a parallel approach.

Many, particularly older, users have greatly reduced strength due to degenerative conditions that affect muscle power or restrict movements of the joints in the fingers, hands and wrists. Most operations on a terminal require finger or hand movements. If the controls are too stiff, the slots too narrow or the machine's grip on items too tight, some users may not have the strength to overcome this and will be unable to use the terminal.

Refer to appropriate physical design guidelines or building accessibility guidelines which give minimum and maximum heights and reach distances. The United Nations have a useful set of anthropometrical data covering ranges of height and reach when standing or sitting in a wheelchair, plus required path and turning space dimensions for wheelchairs.

Ensure that users of all heights can reach all operable parts. The comfortable range is between 1,200 and 900mm. The maximum acceptable reach height for wheelchair users is 1,400mm. 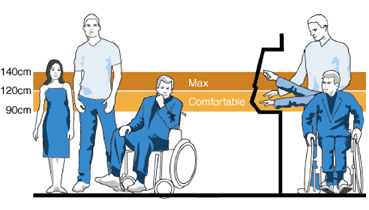 Provide common reach zones. Ensure that users of all heights can reach all operable parts. 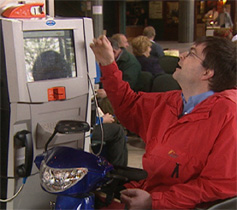 "The biggest problem with card readers for opening doors is that they are positioned at a height I can't reach or somewhere I can't manoeuvre into easily, like a corner." Wheelchair user

"The card reader was installed next to the hinge so that it was difficult to open the door after swiping the card. And if I was using it when someone came through the door from the other side, they would trap me against the wall." Wheelchair user

Be careful with the positioning of things like advice slip bins, which may make it difficult to get close to the terminal.

As far as possible, avoid using controls that have to be gripped and turned rather than pressed. Allow for a maximum pressing force of 2 newtons.

Designers can run simple reach tests at the initial design or prototype stage. Using a mock-up with the controls placed in their intended positions based on appropriate physical design guidelines, simulate short and tall people and wheelchair users by sitting in a chair, standing on a raised area or kneeling down. Whilst this will not be a replacement for proper testing with real users, it will give some insight, from the user's perspective, into what it is like to be reaching for controls and it will help to reveal any serious problems in the layout before further work is carried out. If standing on something, make sure it is sufficiently strong and stable and take care to avoid the possibility of injuries caused by falling off it.

When designing using a computer-aided design (CAD) package, it may be possible to include various simulated users as elements in the design, based on human anthropometrical data.

During development, test the prototype in a realistic situation with real people, particularly people who routinely use wheelchairs or motorised buggies.

During testing, check that controls are reachable from a wheelchair.